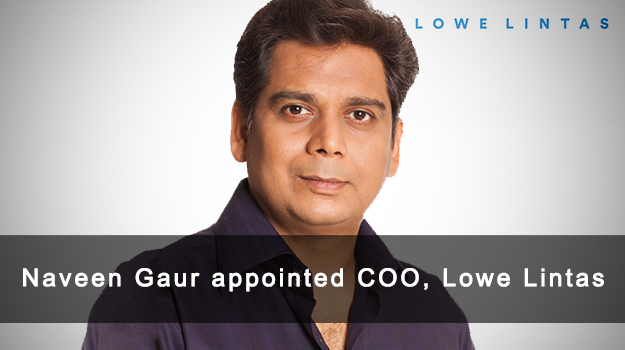 He was until now, President, Lowe Lintas in charge of the New Delhi (NCR) operations.

Effective immediately, Naveen would oversee Lowe Lintas’ offices in New Delhi (NCR), Bangalore, Chennai, Hyderabad and Kolkata. He continues to be based in New Delhi and will report to Raj Gupta, whose elevation to CEO, Lowe Lintas was announced a few days back.

Commenting on the appointment, Joseph George, Group Chairman & CEO, MullenLowe Lintas Groupsaid: “Naveen has played a significant role in strengthening Lowe Lintas’ operations of New Delhi (NCR) and has had an incredibly successful run the past 5 years. His proven track record of driving growth and creative excellence makes him a very strong support for the Lowe Lintas leadership of Arun Iyer and Raj Gupta as we put in place an ambitious and futuristic roadmap for the agency.”

Commenting on his appointment, Naveen Gaur said: “It’s a great opportunity and a privilege to further strengthen this great agency, as we move into this ever changing dynamic business environment. I look forward to partnering with Arun and Raj to drive this agenda.”

Naveen joined Lowe Lintas in 2010 as Branch Head, Delhi. Over the years, he has built a strong team of professionals and encouraged an entrepreneurial culture of growth and creative excellence. Under his leadership, the Delhi office added clients like OLX, Sun Pharma, Pernod Ricard, Cargill Foods, Google among others over the past few years. He even led his team to win major accolades across effectiveness award shows each year over the past 7 years.

In a career spanning over two decades, Naveen has built a startup health and wellness, been the Chief Growth Officer at McCann Worldgroup India, and Business Director (at McCann) for clients such as Coca-Cola, Mastercard, Microsoft, Reckitt & Colman, General Motors, Bacardi, Dabur amongst others.