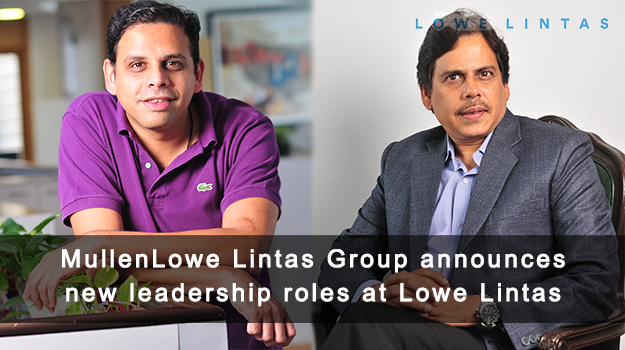 Partnering him will be Lintas veteran Raj Gupta, currently President and Mumbai office Head, Lowe Lintas who will operate as CEO of the agency.

Both these appointments, the communique said were to be effective from April 1st, 2017.

Commenting on the new elevations, Joe said: “Given Lowe Lintas’ consistent brilliant performance over the past 4/5 years, I feel the time is just right to leverage on this momentum and shift gears. But to do so, we need a dedicated and fully empowered leadership. I have worked long, and closely with both – individually and as a team; and I can without a shred of doubt say that Arun and Raj are best placed in experience, expertise and energy to fulfil Lowe Lintas’ business, effectiveness and creative ambitions going forward.”

It may be recalled that when Mullen Lintas was launched in mid-2015, Amer Jaleel and Virat Tandon were handpicked from within the company to lead Mullen Lintas as Chairman & CCO and CEO respectively.

Arun who has been with Lowe Lintas for over 15 years has been the creative genius behind many campaigns across Surf Excel, Idea, Tanishq, Axis Bank, Paperboat, Freecharge, Hotstar, Google, OLX, Fastrack, Flipkart, Hike and many others. He was the youngest Creative Director in the history of Lintas to have been appointed National Creative Director in 2010 and also when appointed Chief Creative Officer in 2016.

Arun Iyer said: “Over the last few years, we have really worked hard to build our reputation as India’s most effective agency on the back of breakthrough creative solutions. Nothing gives us more joy than our brands succeeding in the market. It is with this intent that we are getting ready for the future and the plan is to ensure we have the most contemporary hyper-bundled offering in the industry. This is a huge responsibility, but we are both excited and clear on what we need to be doing going forward.”

Raj Gupta who has been with Lintas for over 25 years has held leadership positions in the company across Media, Digital, Strategic Planning, Channel Planning, Business Development and of course Account Management. His width of expertise and leadership experience across functions, the company feels, will be invaluable in the agency’s journey back to full service or what at the Group they call Hyper-bundling.

Commenting on his appointment, Raj Gupta said: “This new role is both a privilege and a huge opportunity. Privilege for obvious reasons, but opportunity, because Lowe Lintas is probably at its best in almost a decade, thereby allowing us to re-purpose ourselves for the future with our confidence and self-belief at its peak. Great brands have a purpose that never stops unfolding and with our determination to make Lowe Lintas truly hyper-bundled, we will now have so many more ways to tell our brand stories.”

Joe concludes: “Arun Iyer & Raj Gupta at Lowe Lintas and Amer Jaleel & Virat Tandon at Mullen Lintas. All 4 top-draw talent and all 4 home-grown leaders. I could not be any happier and proud about this institution called Lintas.”