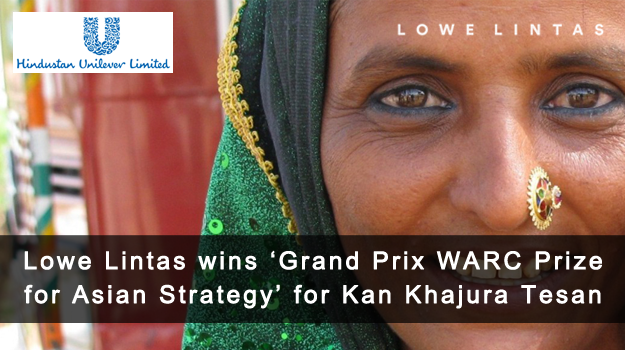 About a month ago, Lowe Lintas + Partners had achieved an incredible feat of India’s best performance yet at the zenith of strategy awards in the world – the 4A’s Jay Chiat Awards in Chicago, with a silver and a bronze. The recognition goes further now with the agency bagging the top honour at another platform that recognises strategic excellence just as widely in Asia – The WARC Prize for Asian Strategy 2014.

The fourth edition of The WARC Prize for Asian Strategy that was held in Singapore last night, saw the agency’s work on ‘KKT – From the ‘dark’ to connectivity’ bag the all-important Grand Prix for Best Strategy. KKT is an initiative for Hindustan Unilever developed by Lowe Lintas + Partners with media partner PHD.

In another first for WARC, KKT was also conferred with the ‘Asia First Special Award’, for insight the rest of the world can learn from.

As an awards platform, WARC Prize for Asian Strategy easily is a class apart from the others on numerous counts. Some of these include:
– Run by the World Advertising and Research Council, it is Asia’s leading platform that recognises great strategic thinking in marketing
– The award is open for all countries across the Asia Pacific region
– This year, it received over 180 entries, a record high for the competition
– The 40 that made the shortlist came from 11 countries, and from a mix of major networks and local independents
– The judging panel comprised of senior client-side marketers and agency experts that gave away a total of 19 awards

Sharing his excitement on the news, Joseph George, CEO, Lowe Lintas + Partners India said, “KKT is a true innovation where a business problem was addressed with a platformic solution. The recognition it continues to amass at a global scale is a great testament to Lowe Lintas’ culture of creative effectiveness. The first Grand Prix for India at WARC makes it a little more sweeter.”

For Anaheeta Goenka and Deepa Geethakrishnan, the team from Lowe Lintas + Partners that led the KKT initiative, the awards are a reiteration of the fact that no matter how small or simple an idea be, the true measure of its success is the change it brings about in the marketplace. Sharing their thoughts, they said, “This win is a crucial milestone of the global journey of creative effectiveness for Kan Khajura Tesan. From Europe to the US to now Asia. The WARC win further demonstrates that ‘solving real problems for real people’ is what the industry celebrates, in any part of the world. We are humbled and delighted by the honour conferred on us, by some of the best in the world.”

With over 30 wins so far including World Mobile Congress, Cannes Lions, Jay Chiat and Spikes Asia so far, KKT is already among the most awarded ideas in the world on creativity and effectiveness this year.

KKT is a ‘mobile radio’, that provides free entertainment to people in the ‘media dark’ regions of Bihar, Uttar Pradesh (UP) and Jharkhand, India’s Hindi- and Bhojpuri-speaking belt. The content is provided to the mobile user for FREE when (s)he gives a “missed call” to a designated number. The content is interspersed with ads for several brands of HUL.

After the initial success in these regions, KKT continues to grow and expand to more regions of the country and is on its way to becoming the largest company-owned medium in the country.

About Lowe Lintas + Partners:
Lowe Lintas + Partners is one of the most storied marketing communication groups in India. A wholly owned subsidiary of New York based Inter Public Group (IPG), and one of the star offices of London based Lowe + Partners worldwide network, it has operating divisions in advertising (Lowe Lintas), activation (LinEngage), design (dCell), digital (LinTeractive | IA), brand consulting (LinConsult), film production (Lintas Productions), healthcare marketing (LinHealth | ICC Lowe) and PR (LinOpinion | G) to manage its 300+ clients. With a talent pool of over 900 people across 9 cities in India, Lowe Lintas + Partners currently manages more brands amongst the Top 5, Top 10, Top 20, Top 50 and Top 100 of AC Nielsen-Brand Equity’s 2013 edition of India’s Most Trusted Brands than any other agency in India. It is also currently ranked by the Effies as the #1 agency in India and # 2, in Asia Pacific.