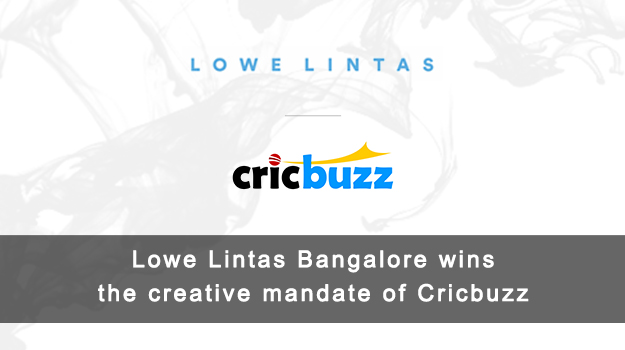 Cricbuzz has appointed Lowe Lintas to handle their creative duties ahead of the Cricket season. The scope of the mandate will see Lowe Lintas conceive a sharp advertising campaign for Cricbuzz during the heavily anticipated Cricket World Cup.

Thanks to the meteoric rise in the number of smartphone users, supported by falling costs of internet bandwidth in India, viewers will experience the game way beyond television sets this World Cup. Needless to mention, there is expected to be a surge in cricket-related content, in multiple formats – ranging from videos to blogs to memes. To thrive in the midst of a storm of similarly-themed content will be a challenge that a lot of brands are likely to face.

Talking about the appointment, Ajith Ramamurthy, Business Head – Videos, Cricbuzz said “Being the No. 1 cricketing platform in the world, it’s time for us to promote the latest offering from the brand. We were looking for a creative partner to deliver a high-impact campaign promoting the video content during the world cup and found an able partner in Lowe Lintas. We are excited about this partnership and look forward to working with the Lowe Lintas team.”

With Lowe Lintas onboard, Cricbuzz aims to attract a lion’s share of user attention for its video content uniquely crafted around the Cricket World Cup. In order to flick a Sixer, it will be prudent for Cricbuzz to grab considerable mindshare even outside the boundaries of a live cricket match.

Commenting on the win, Hari Krishnan, President, Lowe Lintas said, “What Cricbuzz has achieved already is quite amazing. It is India’s largest platform for everything cricket. The video content on Cricbuzz is far superior and insightful compared to what the viewer is used to. We are excited about this opportunity, being cricket buffs ourselves”.

The Bangalore office of Lowe Lintas will handle the account.