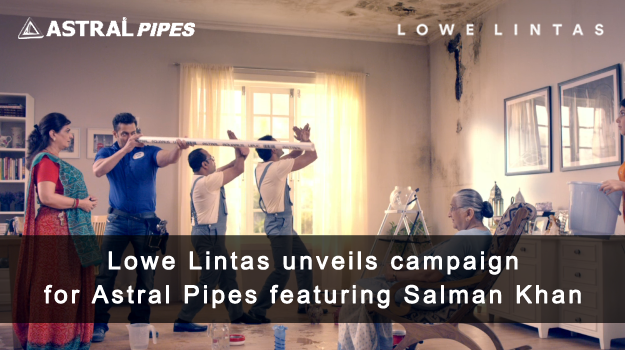 Lowe Lintas has unveiled a new campaign for Astral Pipes, the sanitary product offering from the house of Astral Poly Technik Ltd. The campaign features actor Salman Khan, who has been appointed the brand ambassador for Astral Pipes.

Explaining the campaign’s concept, Sagar Kapoor, ECD-Lowe Lintas said, “Being a low involvement category, the homemaker does not take keen interest in deciding on the quality and make of pipes for their homes. With leakage being the most common problem, it is the plumber who decides on what to purchase without even consulting with the homemaker. Through this TVC, we wanted to convey that if you wish to resolve the issue, then it is essential that you tend to the root problem – bad pipes.”

With a number of players operating in the marketplace, the challenge was to make the communication sound different yet appealing. While leakage is a common problem facing many households, not many players came forward with the promise of offering foolproof solutions to tackle the problem – something that Astral Pipes conveys with conviction in the commercial.

On casting Salman as a Plumber, Kapoor said, “Astral wanted to become the first choice of the homemaker and offer adequate leakage-proof solutions. We realized that our biggest influencer was the plumber and therefore to celebrate him we used Salman’s character as a plumber who’s also the face of the brand.”

Astral Poly Technik plans to put out more executions of the concept in various on and offline touch-points including television, social media, outdoor and activation to reach out to the masses in the coming months.

Astral Poly Technik Ltd. is one of the leading entities in the plumbing industry and boasts a full-fledged research and development division to consistently upgrade its processes and materials. Being the first company to introduce CPVC and lead free UPVC pipes and fittings in India, Astral has extended the horizon of Indian plumbing industry. It has numerous certifications under its belt such as ISI, ISO, UL, UPC (Uniform Plumbing Code) and NSF (National Sanitation Foundation, USA). Astral also manufactures Under Ground piping system, SWR piping system, Column & Agri piping system. Astral also markets world renowned products like Wavin AS low noise piping systems from Wavin, Netherlands and Solvent cement (adhesives) for joining pipes & fittings in collaboration with IPS Corporation USA under their brand name Weld-On.