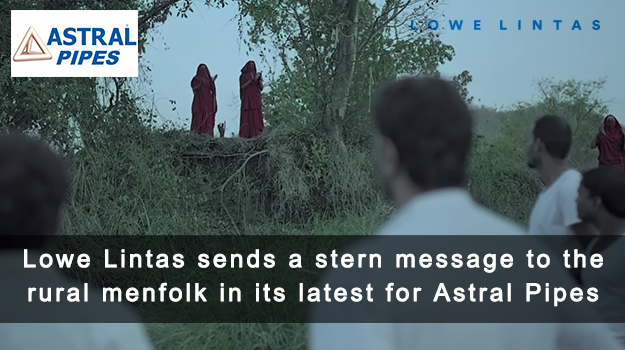 Open defecation: an issue that has been spoken about at great length in the recent past but has there really been any change in the habit? While the jury is still out there in the open, there are a few brands that have taken the onus of pursuing the cause and educating the masses on the need to stop defecating in the open. This initiative has especially gained steam after Prime Minister Narendra Modi’s clarion call to all Indians under Swachh Bharat Mission. Asserting its role as an evangelist for the cause, Astral Pipes has come up with a social message on the subject through its latest film.

Open defecation is an inherent hygiene problem in rural India, more so with women whose safety is always ignored and compromised. So much so that it is a torture for rural women to defecate in the open – a problem which has been ignored by the male members since many generations – as a result of which women are teased, taunted and even raped while going out to relieve themselves. To highlight this plight, Lowe Lintas Ahmedabad came up with a unique idea for Astral Pipes: time for women to take revenge at the casual attitude shown by the male members in spite of Government of India funding the construction of toilets under the Swachh Bharat Mission.

Sharing his thoughts on the need to be associated with this social cause, Kairav Engineer, Sr. Business Development Manager, Astral said, “Astral Pipes is a leader in the CPVC pipes category. Our leadership is attributed to our single-minded focus on innovating to create efficient water management products. But, at one end where we are pioneering products that improve the quality of sanitation management in our country, there are still thousands of women who are denied basic sanitation, forcing them to resort to open defecation. With this campaign, we are not only hoping to spark a realisation about the evils of open defecation amongst those who are the most inflicted, but also support the Government’s Swachh Bharat initiative by creating awareness among masses and playing our part as the responsible corporate citizen.”

The film is set in a rural background where few men are seen making a beeline to the open fields as part of a ritual that’s as old as humanity itself. What seems like a normal routine is actually a disturbing trend where they head out in the open at the dawn of sunrise every day to relieve themselves. This habit has led many womenfolk to follow suit without actually wanting to partake of the habit. Dreadful as they are when they venture out due to fear of being spotted or followed or even picked upon by passer-byes, womenfolk have a very little choice as the men refuse to take cognizance of the dangers that face them every passing day. But this can no longer be a casual affair and the womenfolk have found just the right way to teach the men a lesson.

Acting as moral brigades, the womenfolk are shown surrounding the men as they take positions in the field to carry out their morning routine. In a single chorus, they belt out a meaningful rendition that despises the actions of men for ignoring threats faced by women when it comes to open defecation. So much so that they make them realize the importance of constructing toilets in their own homes instead of surviving on external factors. In the end, the men come to terms with the importance of building toilets at home so that the womenfolk feel secure and basic hygiene is maintained.

Elucidating on the campaign thought, Sagar Kapoor, ED, Lowe Lintas said, “We are very excited to begin the Social Mission journey with brand Astral. The issue of open defecation has been taken up by many brands and authorities. And thankfully so. There’s so much to be done in the area. The irony is the rural menfolk take this issue as lightly as a nag by the women. While on the other hand open defecation has drastic outcomes like eve-teasing, rape and even murders of women. Our communication piece, therefore, has taken a very different tone and pitch, to bring about not just awareness but also effect change.”

The film has been launched on the online as well as offline platform and will be pushed extensively across government-promoted outdoor initiatives as well.