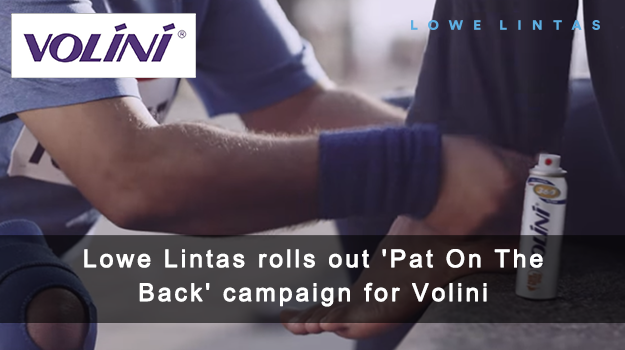 LOWE LINTAS ROLLS OUT ‘PAT ON THE BACK’ CAMPAIGN FOR VOLINI

We as children have been our parents’ top priority, sometimes even at the cost of their well-being and happiness. While the pain they took mostly remains hidden from us, can we ever give back enough? We know, we can’t; but isn’t their joy in the attempt.

This is the premise of the new Volini #PatOnTheBack campaign. It urges us to reflect on whether we are doing enough to give back to our parents. At times, we are so caught up in our own lives, that our elderly parents’ needs are overlooked. This film celebrates the small ways in which children can give back to their parents. Just being there means the world to every parent. Volini helps in overcoming pain to create magical memories.

Commenting on the campaign, Vidhi Salgoacar, Head of Sun Pharma Consumer Healthcare said, “Overcoming pain to create beautiful moments in life is what Volini stands for. This campaign is one of Volini’s many initiatives to reach out to the evolving audience who have endorsed and trusted Volini and made it the No. 1 Pain Relief Brand1 of the country.”
Overcoming pain to create beautiful moments in life is what Volini is all about. Pain should never stand a chance when we are doing things that we want to. Volini stands by every son/daughter who takes the pain to reach out to their parents, especially when they need them the most. Volini supports all those who overcome pain and do something good.
The film begins with a young man rushing through the busy streets of a bustling city. As he navigates through the crowded streets, he accidentally twists his ankle and is seen to be in immense pain, but he refuses to give up. He limps onwards towards his final destination which is the finish line of a marathon. He attempts to look at the finish line through the crowds when suddenly we see an elderly man crossing the finishing line. The young man runs, despite his injury to embrace his elderly father and celebrate this momentous occasion together. The film turns a full circle with the elderly man realizing that his son is in pain, and offering him Volini for pain relief. The film ends with ‘Every child who takes the pain to be there for their parent deserves a pat on the back’. It makes us wonder ‘where are we’ when those moments pass by. And Volini as a brand has always stood for being a loyal partner in times of pain.

Highlighting the creative thought process behind the campaign, Joy Mohanty, Regional President – North & East, Lowe Lintas said, “We felt there was an interesting space around children who go the extra mile for their parents, those who take the pain to be part of their important moments. And the brand celebrates those that are committed to this.”