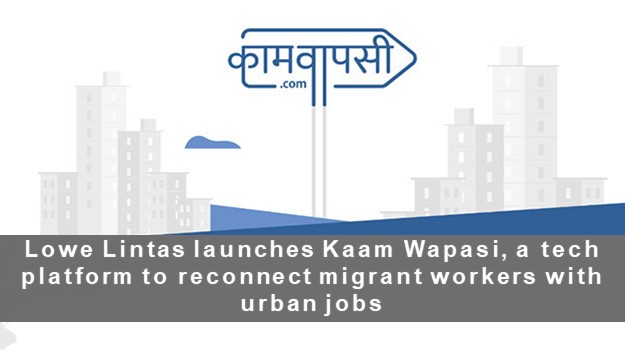 Lowe Lintas, creative agency of MullenLowe Lintas Group, India, has announced the launch of Kaam Wapasi, a unique tech platform built to help migrant workers get back to work and at the same time assist employers with access to a pool of readily available workers.

Companies like Zee Network, Bharti Airtel, Axis Bank, Radiocity and Razorpod have put their weight behind the social-good initiative that complements the government’s initiative to fuel the Indian economy.

Prateek Bhardwaj, CCO at Lowe Lintas, said, “After all that they’ve been through, migrant workers aren’t ready to return to cities without a sense of clarity and control. They need active projects to return to. Unfinished projects, on the other hand, need workers to restart. Kaam Wapasi is a creative tech intervention to help resolve this stalemate. By connecting migrant blue-collar workers with projects in various cities, we hope to accelerate the unlocking of the Indian economy.”

The national lockdown imposed due to Covid-19 has impacted migrant workers the most. Thousands of migrant workers were forced to go back to their native states due to loss of jobs and livelihood due to the lockdown. Even as the nation gradually eases lockdown restrictions, the workers are reluctant to return, thereby impacting various industries dependent on them.

The Kaam Wapasi platform will primarily operate as a mobile-first site, but will also offer an IVR solution to those who may not have access to a smartphone. It can be accessed by visiting www.kaamwapasi.com or by giving a missed call on 1800-202-44-88.

The platform allows workers to choose jobs by skill and location. Currently, jobs are segregated into construction, logistics, restaurants and manufacturing, with further sub-options based on skill.

Virat Tandon, Group CEO at MullenLowe Lintas Group, said, “Creating the technology is just one part of the puzzle for us. We also intend to activate it at scale, and it’s heartening to see so many big brands collaborating with us to deliver that scale. Kaam Wapasi will be accessible to workers across the spectrum and as it grows, we hope that more companies join us in this endeavour.”

The platform is supported by a multi-media targeted campaign on TV, mobile, radio and digital mediums to attract employers and migrant labour. While Lowe Lintas has led the Kaam Wapasi project by developing the basic tech and communication, brands like Zee Network, Bharti Airtel, Axis Bank, Radiocity and Razorpod have contributed with strategic media and tech support. Through the many collaborations, Kaam Wapasi aims to impact the lives of at least one million migrant workers.