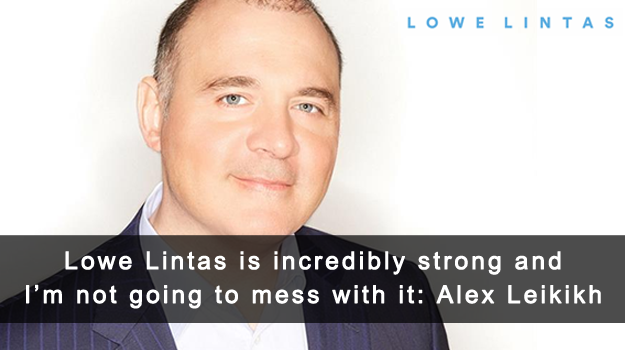 LOWE LINTAS IS INCREDIBLY STRONG AND I’M NOT GOING TO MESS WITH IT: ALEX LEIKIKH

Alex Leikikh, Global CEO, MullenLowe, who took over in May this year, speaks about his reason for being cautious and not rushing to rebrand Lowe India which is household name in his view “I don’t think we should paint the whole world with one MullenLowe brush. In some markets where the brand is so strong like Lowe Lintas in India, maybe we don’t rebrand it,” says Leikikh.

However he also speaks about a possibility of Brand Mullen entering in the Indian market soon a conversation which is underway between him and Joe (Joseph George, CEO of Lowe Lintas + Partners, India).

Speaking on the reasons for the merger of Lowe and Mullen, which was announced in May this year, Leikikh said, “We had two key reasons; firstly we had a number of clients looking for representation overseas, and as we’ve added clients with global ambitions, we needed reach into international markets. Secondly, we’re only as good as people who work for us. It’s a talent business at the heart of it and we are on a global hunt for talent constantly. We were looking for other ways to attract talent into our company. International markets obviously represent that. Look at the talent in India, Spain, Columbia, it’s really amazing.”

“If you look at Lowe’s perspective, it’s a strong international company, with no significant global presence. It was kind of the only global network that I could determine didn’t have a strong US presence. The reality is if you’re going to be a global network, you have to have presence in the biggest ad market in the world which is the US,” adds Leikikh.

Leikikh also explains that the driving force behind the merger of Mullen and Lowe was not cost efficiencies, so unlike other mergers there were no casualties where human resources are concerned. “This was about Lowe entering the US and Mullen into international markets. And liquid talent across the network. Both the companies are doing fine financially and we are going to continue to pitch business together and add global revenues but what we really want to do is to focus on adding another one or two multi-national clients to the roster. There is this idea of hyper bundling in US which is why Mullen has been so successful. We take our best practice areas and we smash them together to get to the best idea, whether that’s media or creative. If you look at our work for Jet Blue or American Greetings or most recently Royal Caribbean( Cruise Lines) , those are all bundled accounts. By that I mean creative and media working together,” shares Leikikh.

Excerpts from the interview:

Is there going to be an infiltration of existing clients for both Mullen and Lowe, how does that work?

Yes, there are four clients in the US, who were already in active conversations in terms of opening into and entering international markets. That’s already underway. If you look at our biggest global client Unilever, there is no doubt we are already starting to do work on Unilever’s behalf as we created MullenLowe US.

Is Lowe India soon to be branded MullenLowe?

With a caveat, there are some markets converting to MullenLowe immediately. MullenLowe, NY, Boston, Brazil already converted. However there are some markets where the brand has been so strong for so many years, like Lowe Lintas in India. It is a household brand. I don’t think we should paint the whole world with one MullenLowe brush. In some markets where the brand is so strong like Lowe Lintas in India, maybe we don’t rebrand it.  I am not going to go and push all markets and rebrand everything. There is a case to be made in certain markets where the brand is extraordinarily strong.  Similarly 303 Lowe in Australia is very well known and Lowe Brindfors in Sweden is very well known. We really have to be thoughtful about if and when we convert those brands.

Having said that does Lowe Lintas stay the way it is or get rebranded, and if yes when?

Lowe Lintas will remain as a brand for now likely for medium to long term. I don’t see Lowe Lintas the name as it exists today changing for years if ever. The other part of that is  that India is a massive and growing market, and Joe would agree that there is a point in time, we are not sure when as of now for Mullen to enter that market, this could be as MullenLowe or Mullen Lintas, whatever the name is as a brand. There is no reason another brand can’t enter that market somehow branded Mullen. So if you think of it that way in terms of new brand entering the market, branded Mullen we are having that conversation. But Lowe Lintas is incredibly strong and I am not going to mess with it.”

Are there changes in the offing for Lowe India?

When I met with Joe and he took me through the history of the agency and showed me the work, I saw the work like a consumer would see the work. It was one of the most extensive presentations with 30 commercials. It is a very diverse office working on hundreds of clients.  A lot of agencies would have two or three massive clients and a bunch of little ones. India has got hundreds. It is hard to manage. But it is very well run. Joe is a strong executive, managing some great creative talent. Some markets you look at and say, ‘I need to fix that and that, we don’t have that problem in India.’ If you look at the score card there is strong leadership, strong creative, strong financial performance. I am very happy with it.

Will there be joint participation post the merger on pitches?

First of all, when we do a global pitch, a big multi-national one, we are going to tap the skills and resources of our offices around the world and certainly we will tap into the abilities of Joe and the creative guys in India to help us pitch globally. Not only to represent the market locally but to develop our strategies and ideas on a global basis. Just because you are in an office in India, doesn’t mean your ideas can’t go live on a global scale.  Secondly, we have already started doing this when we have brand opportunities and briefs in the US on either new or existing business. We are sending those briefs out into the key markets. So the guys in India are going to have a shot at working on US brands. Finally, there is amazing brain power beyond sort of creative in India if you look at the volume of strategists the market produces and analysts, for example, there is an amazing opportunity to build a strategies and analytics practice in the market.

What has your experience been like, taking over as CEO of the MullenLowe Group, a whirlwind of 8 weeks?

It’s been a market study as you’d expect. I spent time with the guys in our Latam markets, Argentina, Brazil, Mexico, and I did a world trip and spent some time with our folks in London, Hamburg, Barcelona, Singapore and South East Asian leaders and then Shanghai too. I am going to make a separate week-long trip to Mumbai probably after November. We have wonderful, talented, nice, normal people in the business. You get a lot of egos, you get people who are full of a lot of sizzle and not a lot of stake, I haven’t found that in our network, I have found normal, nice, talented normal people. I have found people who are really excited about the model we’ve built in the US. On my watch, I would like to take that bundled idea and export it. We have room in a lot of markets to bring our media hub which is our standalone internal media company there is an appetite for that brand to enter markets like India and Australia. There is a lot of appetite for the idea of creating a model global network around a bundled model.