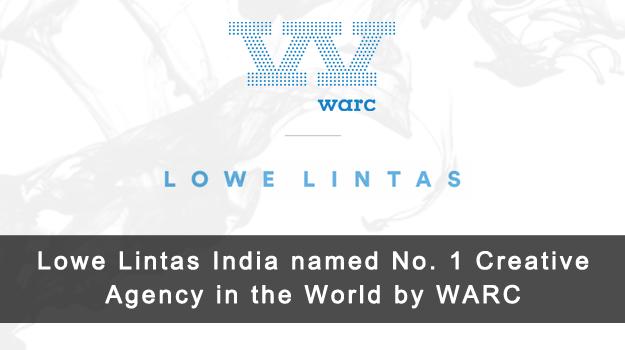 LOWE LINTAS INDIA NAMED NO. 1 CREATIVE AGENCY IN THE WORLD BY WARC

WARC 100, an annual ranking of the world’s best marketing companies and campaigns, based on their performance in effectiveness and strategy competitions, has declared Lowe Lintas India as the No. 1 Creative Agency in the World. The study focuses on marketing that makes a difference, driving business performance or changing consumer behaviour. For many years now, WARC 100 has set a benchmark for commercial creativity, globally. This is the first time an agency from India has landed the top spot.

The rankings are compiled based on the winners of 87 effectiveness and strategy awards from around the world.

Lowe Lintas India accumulated 212.9 points while AMV BBDO UK took the second spot at 191 points and Colenso BBDO NZ that collected 147.6 points to finish third. This accolade is another addition to the strong run that the agency has had over the past few months. Recent successes of Lowe Lintas on global platforms include Ad Age International Agency of the Year, the American Jay Chiat Awards and WARC Asia, all of which were firsts for India.

Lowe & Partners, Worldwide saw significant representation in the WARC 100 listing. Notable ones being – Lowe & Partners ranked #4 amongst the top Agency Networks in the world; and two other agencies from the Lowe network, Lowe SSP3 and Lowe Roche featured in top 25 agencies list. Furthermore, 5 of the campaigns created by the network featured in the WARC 100 Best Marketing Campaigns.

Campaigns created by Lowe Lintas India took two of the top 5 spots on WARC100 as the World’s Best Campaigns. Kan Khajura Tesan, (created in collaboration with partners including PHD and NetCore), has been named the World’s Best Marketing campaign while ‘Help a child Reach 5’ for Lifebuoy was ranked 4th. Again, these are the only campaigns from India to feature in the World’s Top 10.

Joseph George, CEO, Lowe Lintas + Partners said, “We hold WARC in very high regard. This recognition is both extremely satisfying and spurring. We have had a terrific run on creative effectiveness this year across the globe; and all the accolades have further reinforced our belief in the type of work we want to do and believe in.”