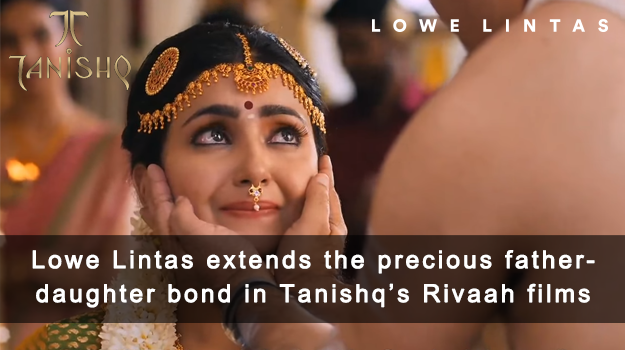 After the success of the national campaign for ‘Rivaah’ – Wedding Jewellery collection, last year, Lowe Lintas has strung a new communication addressing Southern India’s Kannada, Malayalam and Tamil speaking population. Keeping the central theme around the ‘precious bond’ between a father and a daughter, the new films are shorter in duration but have captured the same appeal as the previous campaign. Shorter duration formats are a challenge and need careful crafting that relates to the 3 communities. A separate long format film will be live on digital media. By catering to the distinct needs of each community, Tanishq eyes a larger pie of the South Indian wedding market through its Rivaah collection.

The campaign rests on the singular insight that a father always wants the best for his daughter. The films mirror the father’s feelings as his daughter is getting married. These moments are the purest and clearest manifestation of the father-daughter bond. Each film has a traditional setup of that community making it as relatable as possible for the target audience.

Deepika Tiwari, Associate Vice President – Marketing, Tanishq says,“Every father in the world wants the best for his daughter. The new films on Rivaah are our endeavour to show the same. These three films are an extension to our earlier Rivaah TVC. We have captured the sensibilities of the cultures and present a wedding range that embodies the promise of Rivaah – to give the bride the best in terms of design, value and purity at competitive pricing. From KasuMalai, Vanki and Oddiyanam for the Tamil bride to Saunta da Dabu, Kasina Sara for Kannadiga bride and Palaka Mala and Pulinakha Mala for the Kerala bride – Tanishq offers a wide range of traditional designs re-interpreted to current sensibilities.”

The films conceptualized by Lowe Lintas Bangalore capture intimate feelings showing the gush of emotions father goes through when he realizes that it’s almost time to say goodbye to his daughter, as she prepares to start her new life. They have highlighted the nuances of each community, with the overarching thought of a father wanting the best for his daughter, cutting across all cultures.

Arun Iyer, Chairman & Chief Creative Officer, Lowe Lintas says, “As easy as it is to know that the father and daughter bond is always unique and strong, depicting it is equally difficult. We are happy that we found such a beautiful way of showcasing a father’s love for his daughter with just his thoughts rather than his conversations.”

The campaign is live across on and offline media.