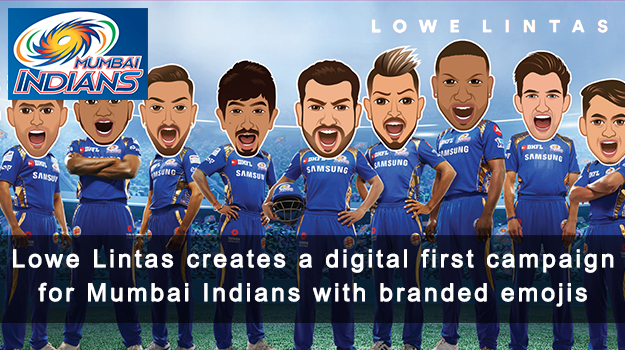 In all the frenzy that grips the nation with the onset of Indian Premier League every year, advertisers clutter the market with ‘me-too’ ad campaigns that desperately try to seek attention. Mumbai Indians’ latest campaign by Lowe Lintas Mumbai seems to have cracked the winning approach with their digital-first campaign even as IPL warms up.

India is a Cricket-obsessed nation, and most of its youth is active on social media discussing the game and its nuances as it unfolds. They use ‘social-media-speak’ that’s best understood by their peers with phrases like BRB, OMG, LOL, and colourful emojis for every mood. However, for the small-screen commentators of the game who sit outside the commentator’s box, there is no special language to express their burst of emotions. Mumbai Indians decided to fix this invisible lingual hurdle by developing Mumbai Indian Emojis. These emojis have been developed keeping in mind the unique traits and nuances of the players’ personality, and the game itself. For every MI (or a cricket) fan who goes through a roller coaster ride of emotions during matches, the emojis help express feelings perfectly.

Mumbai Indians’ spokesperson added, “Given our large fan-following on social media we are always on the lookout to reward our fans with unique content and engage with digital-first experiences. Our player emojis are central to our campaign across all touch points from digital, offline, in stadium, content and we already see huge traction for our assets with over 300000 downloads and shares.”

With its emojis, Mumbai Indians aims to become the conversation itself, than being just a part of it. In every game. Their campaign theme for the season is Game On. Emotions On.

Arun Iyer, Chairman and CCO Lowe Lintas quipped, “Mumbai Indians is the only IPL team to have won the title for three times. So as the season starts, the expectation from the team is high and so are the emotions, which lead us to the idea of ‘Game on. Emotions on.’ Also, as we started, what we noticed was an eye-opener – the online world had only one emoji for a game that is loved the most by the country. Moreover, we felt that Mumbai Indians, a team that’s driven by the love for the game of Cricket is best suited to correct it. Leading us to the creation of ‘Player inspired Emojis’. It would help our fans live and express their emotions better through the season.”

The fans can download the Mumbai Indians app from PlayStore or AppStore and get the free emoji pack to use across all social platforms.

Lowe Lintas Mumbai team has extended the campaign in the offline world with Out of Home, Merchandising and all touch points using the Mumbai Indians’ emojis theme to provide a complete experience.

Emojis can be downloaded from here: