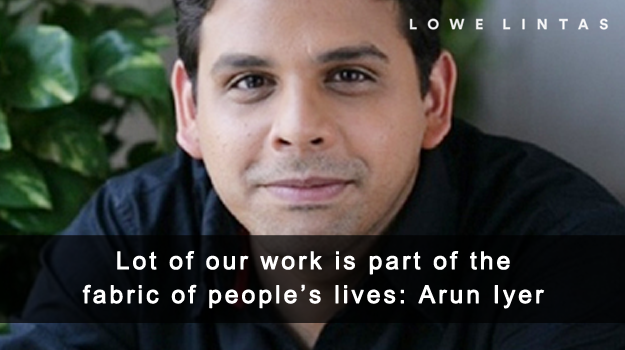 LOT OF OUR WORK IS PART OF THE FABRIC OF PEOPLE’S LIVES: ARUN IYER

Adgully: What have been the major developments at Mullen Lowe Lintas following the rebranding last year?

Arun Iyer: There have not been any major developments at the agency because of the global rebranding. We have spun off a separate agency called Mullen Lintas and we have Lowe Lintas. We now have two separate entities operating like completely different agencies. So, that’s been the only difference. Otherwise, it’s been the regular logo change, etc.

AG: Mullen Lowe Lintas Group has managed to be the most creative agency at the Warc 100, ahead of global creative agencies for the second straight year. How was this feat achieved?

AI: To begin with, it was not achieved thinking that we wanted to achieve that. We just kept our heads down and focussed on making sure that we came up with the best possible solutions for our clients, making sure that it worked for them. We are seriously bullish on making sure that a client’s problem is solved and that the communications task that we set out on is really effective for the client. These are outcomes and not some planned strategy to top a list. Our single minded focus on what’s the most creative solution that we can come up with for our client and making sure that it works really well for them in the market – those are the only two things that we worry about. And I think it’s that focus that’s paying off.

AG: What are the particular creative parameters and creative philosophy that set Mullen Lowe Lintas apart from other agencies?

AI: One of the things is that a lot of our work is a part of people’s lives. We try and come up with work that becomes a part of the fabric of people’s lives – either we borrow from culture or we contribute to culture. We are always working towards making sure that it’s something that sparks the minds of the people in general rather than just being a hard sell kind of message.

It happens across the board – for example, the campaigns for Idea, Axis Bank, Hindustan Unilever, Lifebuoy, Clinic Plus, Kan Khajura Tesan, Tata Tea, Havells – it’s a body of work across the board. Even if you take some of the work done for start-ups and brands like Paper Boat – using the signature tune of ‘Malgudi Days’, creating a connect with people and sparking off nostalgia for them – it’s visible across the agency in the grammar of the work that we believe in and not necessarily in only a brand or two.

AG: In recent times, we have seen a rise in long format ads, especially on digital media. Do you think maybe agencies are finding a time format of 30 seconds or less inadequate to tell a story?

AI: I don’t think there is an issue like that because as much as there are 60 seconders, there are enough great 20 seconders and 30 seconders that are also doing their jobs. While I think that there is a lot of freedom that agency creative people are feeling with this long format available to them now, I don’t think that the shorter duration television commercial is necessarily gone or people are struggling with it. I think the quality of that is what one needs to focus on and that’s what we try and do even if it is a 20 seconder or a 30 seconder for television. How do we make sure that it gets remembered a lot more than just any regular ad. So, it’s the quality that is more important that what the duration is. When I say quality, I mean the quality of the thinking.

AG: What exactly goes on in your mind while formulating a creative strategy for a client? What is the first step in the formation of the creative campaign?

AI: Our agency’s first step is we focus disproportionately on identifying what is it that we are trying to resolve or solve. So a lot of time is spent on understanding the problem, if one understands the problem well only then can you come up with a great solution. So the first step is where we focus and identify what we need to be doing and how do we go about it is the next step.

AG: Kan Khajura Tesan is a much appreciated, multi-award winning campaign. If you were to go one step beyond that, do you think something like that is possible or was it kind of a ceiling that you reached with that particular campaign?

AI: I don’t think there is something called a ceiling when it comes to anything, because I think that there will be years when you land up with a campaign that is a multiple award-winner; there will be years when you will probably not have as many. What is important is to keep trying not so much to win but to make sure that your solutions are great and something that really work for the client and everything else is a by-product and it’s not something that we focus on.