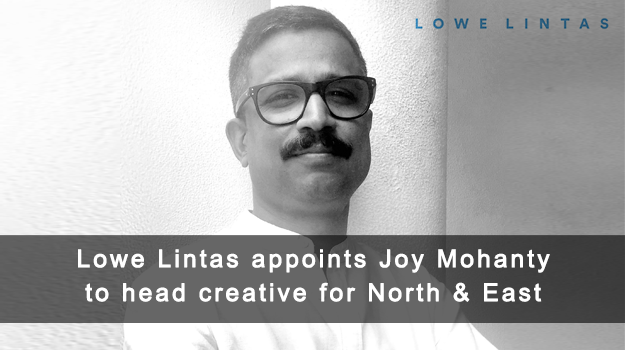 Lowe Lintas has announced the appointment of Joy Mohanty as Regional President – North & East. Joy will lead the creative function for the Delhi and Kolkata offices of Lowe Lintas reporting to Chief Creative Officer, Arun Iyer.

In a career spanning 23 years, Joy has worked with leading agencies in India. His last assignment was as National Creative Director, Publicis Capital, from where he moves after over 11 years. His portfolio includes work for leading clients like Maruti Suzuki Corporate, Makemytrip, Maggi, Nescafe Sunrise, Nestle Every Day, Milkmaid, Intex, Subway, Spicejet, Swift, Apollo Tyres, Suzuki Motorcycles, LG Home Appliances and others.

Welcoming Joy to the agency, Arun Iyer said, “Lowe Lintas Delhi has been buzzing with some spectacular work in the recent past. Having someone like Joy Mohanty lead and drive the creative function, will further consolidate our reputation as being the most creative agency in Delhi, as also to push forward the creative agenda in Kolkata. We welcome him wholeheartedly and look forward to working closely with him to usher in an even stronger creative culture in these 2 offices of Lowe Lintas.”

Speaking about his new role at Lowe Lintas, Joy Mohanty added: “It’s a great feeling to be part of an institution like Lowe Lintas. I have admired their work over the years. It will be an honour for me to add energy and momentum to a body of work already making waves. I can’t wait to get started.”